Inside the Doctor’s Bag

For those of us old enough to remember when doctors made house calls, nothing is more iconic than the leather Doctor’s Bag, which contained all the basic tools for evaluating, diagnosing, and attending to a patient’s ailment or illness from their bedside. Typically those tools included a stethoscope, reflex hammer, blood pressure cuff, mercury thermometer, syringes, tongue suppressors, bandages, alcohol, penlights, and the other implements of the trade needed to treat a wide range of routine and emergency medical issues.

Although home visits are now associated more with “concierge” doctors than with the general practitioners of old, the doctor’s bag is still an important and practical accessory for the traveling medical professional. It’s what is inside the bag, however, that has changed over time, leaving in the wake of progress a range of items that define the market for medical collectibles today, from medical textbooks to surgical instruments, medicine jars, and doctors bags.

The road to modern medicine has been a long one, and doctors have come up with a variety of tools along the way, many improvised in the moment to address the medical issue at hand. Nowhere was that more the case than on the battlefield, where crude implements and methods have been used to address the needs of the wounded for centuries.

During the Revolutionary War, battle injuries were addressed with such tools as grooved forceps, amputation saws, scalpels, and lancets. Since doctors could not receive medicines from England during this time of war and anesthetics had not yet been invented, they had to improvise and use painkillers such as some mercury compounds, lavender spirits, and cream of tartar. In preparation for surgery, officers were given rum or brandy to help reduce the pain. Soldiers, on the other hand, were given a wooden stick to bite down on.

During the Civil War, amputation kits and surgical tools included saws, forceps, trephines (hole saws used to remove circles of tissue or bone), knives, tweezers, and tourniquets. There was little to no attempt to keep surgery sterile, as this, too, was an era before antiseptics, or anesthesia for that matter. Instead of treating infections brought on by battle wounds, surgeons would simply remove the artillery or amputate the affected area. You can learn more about Civil War surgical tools in Melody Amsel-Arieli’s article.

From a medical standpoint, World War I was a miserable and bloody affair. In less than a year the American armed forces suffered more than 318,000 casualties, of which 120,000 were deaths; however, medical care on the battlefield was more organized than in previous wars with the establishment of a medical corps and mobilized transport. Although wound care was much better than during previous wars (mortality following amputation dropped from 25 percent during the Civil War to 5 percent during WWI), medical practitioners were now faced with new battlefield threats such as shell shock, lice and diseases contracted in the trenches, and the effects of nerve gas.

Today, collections of medical and surgical tools, field kits, medicines, prosthetic devices, textbooks, surgical catalogs, medical and pharmaceutical memorabilia, and other related artifacts tell a compelling story of one of the oldest continuing professions, and how our understanding of the human body, and advancements in science and medicine, save lives every day.

Many medical practitioners of particularly the 19th and 20th century were also great collectors of their profession’s history, seeing historic value in outdated and discarded instruments and texts, and donating their collections to museums, libraries, and universities for future generations to study and learn from. One public and unique example is the Mütter Museum in Philadelphia, PA.

Dr. Natan Schleider, M.D. of NATAN SCHLEIDER GALLERY LLC-purveyor, restorer, and collector of fine medical antiques who has used his collection to recreate an early-20th century doctor’s office for the enjoyment of his patients. It’s a pure throwback to a time that was for an appreciation of how far we’ve come! 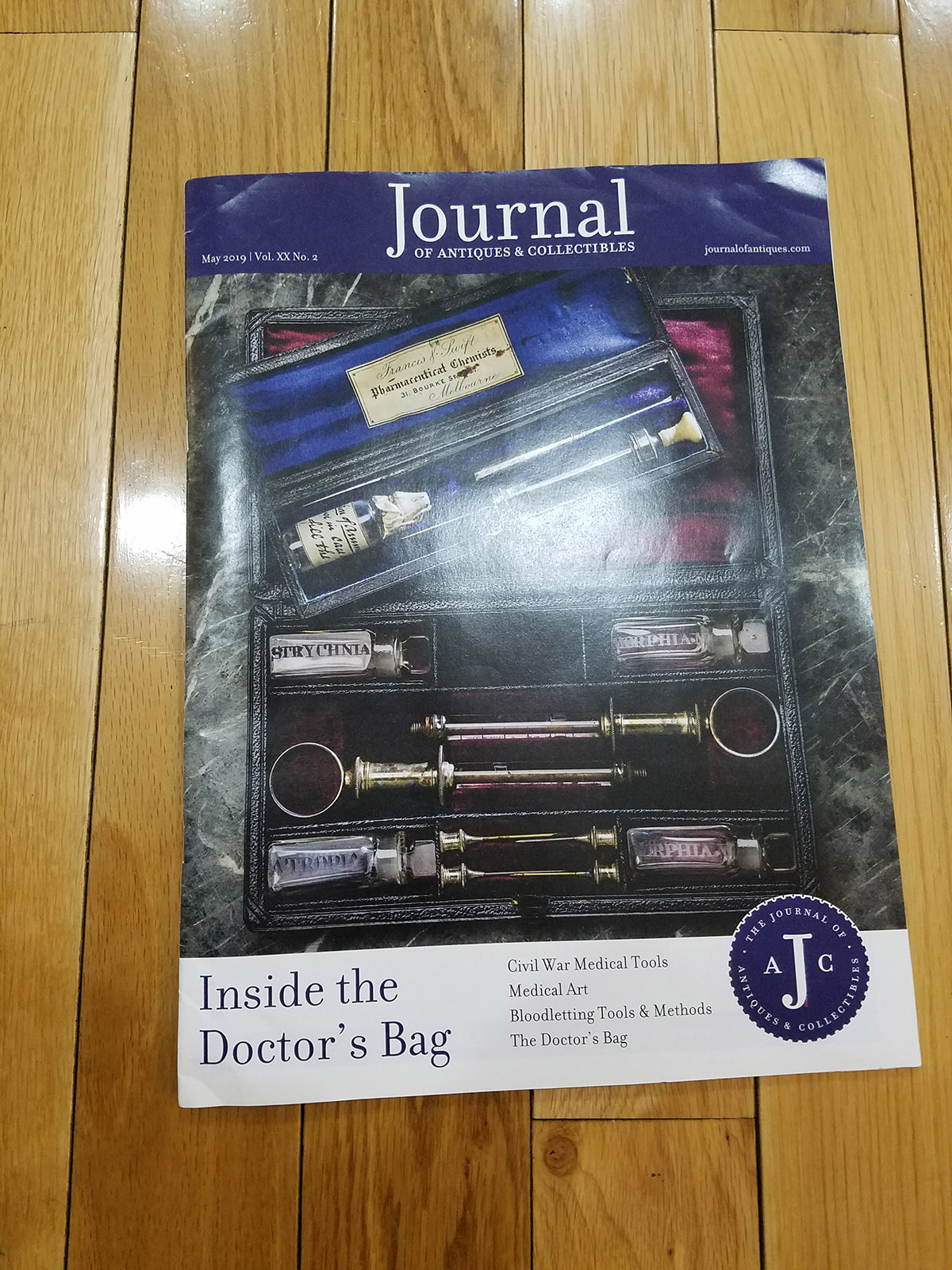